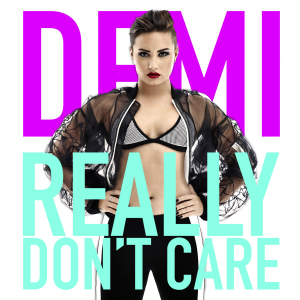 Demi Lovato continues promoting her fourth studio album ‘Demi‘, released on May 10, 2013 via Hollywood Records. Right near the first year of its release, and in the midst of her ‘Neon Lights Tour‘, the singer and actress is finally ready to start promoting another track from the album after releasing ‘Neon Lights‘ in late-2013.

The fourth official single is ‘Really Don’t Care‘. The song features guest vocals from British recording artist Cher Lloyd, who is one of the opening acts on the tour. It was written by Lovato and Lloyd along with Carl Falk, Savan Kotecha and Rami Yacoub, and was produced by Falk and Yaboub.

It accumulated the most views of all the songs Lovato streamed from the album prior to its release, and was also the best-selling non-single from Demi in this era. Everything points that should be an official single. Finally, it has gained its category and will have its proper promotion as a single. The song is pure pop, pretty generic but effective and it’s radio friendly from the first listen thanks to its feel-good attitude. It reminds me One Direction sound from their second album ‘Take Me Home‘ (2012).

Hollywood Records filmed the lyric video with Brazilian fans in São Paulo and Rio de Janeiro, and it was premiered on VEVO on Wednesday May 14th. The song officially impacted U.S. mainstream pop radios on May 20th.

A promotional video recorded during the Neon Lights Tour performing the single was premiered on VEVO on Wednesday June 11th. The official music video filmed during the Los Angele Pride on June 8th was premiered on June 26th and it was directed by Ryan Pallotta. In the video starring American blogger and TV personality Perez Hilton, and American actress and singer Kat Graham.

About the music video, Lovato confirmed that is dedicated to her grandfather, who was gay. She said:

I’ve never spoken about this before, but my grandfather himself was a trailblazer. He was brave enough to come out in the 1960s, and I feel a lot of my spirit has come from him. He passed away a few years later and I only wish he could have been able to see all the progress that has been made