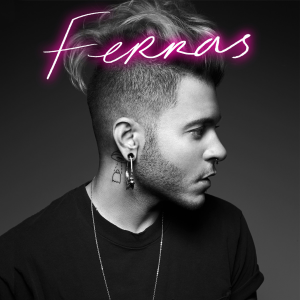 Ferras Alqaisi, known professionally as Ferras, is a Los Angeles-based singer-songwriter who was signed with EMI as part of Capitol Records. He debuted in 2008 with his first album “Aliens & Rainbows“, including smash single “Hollywood’s Not America“, a song featured on talent show “American Idol“.

Six year after, the singer is finally back to the business with some new music included on his self-titled EP “Ferras“, released on June 17th. The EP includes five pop gems showing again his potential talent and his amazing and elegant voice.

Among the songs I highlight one in particular entitled “Legends Never Die“. It’s a heavenly and beautiful anthem with the guest vocals of American recording artist and international popstar Katy Perry, which is close friend of the singer for several years. You can hear the rest of the tracks on his official Youtube/VEVO channel.

“Legends Never Die” was written by Ferras, Sarah Hudson and Greg Wells. The EP is his first release under her new management Metamorphosis Music, a label owned by Katy Perry, which he is the first artist signed. Perry is also the executive producer of the extended play. She said:

Ferras is a man with a message, and a unique lyrical way of communicating his perspective on life that makes you feel connected to every note when you listen. ‘Speak in Tongues’ is a song with raw emotional power that I wish I wrote. I believe he is going to be an important artist to watch unfold. I am SO ecstatic the world gets to hear his music now both online and on tour with me

Ferras explained that is so happy to be a part of this project. About Perry, he said:

She is very blunt and doesn’t sugar-coat things, which I appreciate. Also, she gave me the freedom to do what I wanted musically and was a natural partner

The singer unveiled the official lyric video of the EP’s opening track “Speak In Tongues” on VEVO on Friday June 20th. The video was directed by Aya Tanimura and featuring American actor and dancer Khasan Brailsford.