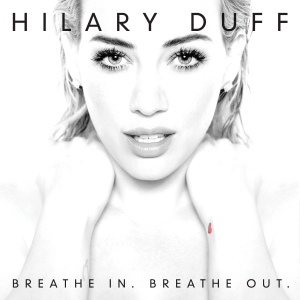 “Breathe In. Breathe Out.” is the fifth studio album by American singer-songwriter and actress Hilary Duff. It was released on digital retailers on 12 June 2015 via RCA Records.

It comes preceded by the buzz single “Chasing the Sun“, and another buzz single “All About You“, released on Monday 11th.

After Mediabase climbed a promotional banner where one could read October 14 as the album’s release date, Hilary Duff has come to deny the news on Twitter, saying that we have to wait “a few more months“.

During a recent inteview with The TV Page, Duff talked about her upcoming comedy series Younger and her highly-anticipated new album. She said:

Being on the show, I had to take a step back from music, but now that I am not working, I am getting back in the studio. I think I am going to go spend a week in Sweden working on new songs

In early February, Duff was in Sweden and she has been in the studio working with Tove Lo, Max Martin and Shellback in new music. A few days after, Duff confirmed she was in the studio with hitmaker and vocalist Matthew Koma.

The third official single from the album is the song “Sparks“, released on 7 April 2015. It also served as the promotional song to support the series premiere of her comedy series Younger which was premiered on March 31.

Duff revealed that the name of her song about her son Luca is “This Heart“, but ultimately it was not included in the tracklist. Another track confirmed on the album is the song “Night Like This“, a special duet with former Big Time Rush member Kendall Schmidt, now fronman of American band Heffron Drive.