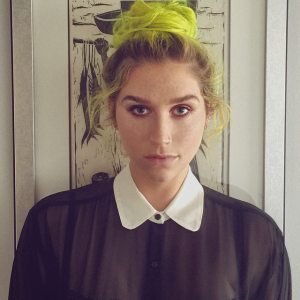 Stop the world right now! Kesha (now without $) has decided to invest the money of her lost letter “$” in making a good comeback album. The singer is making the final details of what will be her highly-anticipated third studio album, scheduled to be released later this year or early 2016.

This will be her first release after breaking her contract with Kemosabe, record label headed by producer Dr. Luke, who’s responsible for most of her hits, formerly with the dollar symbol. Little is known about what will be the producers of this new era, among which we know is Pete Nappi.

In July 2014, her website was revamped and it shows her new look era with so many colors and roses in her hair. Lana Del Rey and her impact. A new track “Lover“ produced by Spookey Ruben and Schpilkas, was premiered on November 2nd. A track included as part of the producer Spookey Ruben’s album “Welsh Rarebits“.

During Valentine’s Day this year, Kesha revealed some details of the upcoming album at NY Fashion Week. On June 10th, she unveiled the name of new track called “Child of the Moon” via Instagram. Maybe the new single is coming…?