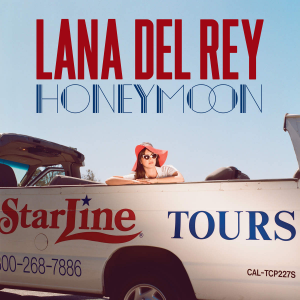 “Honeymoon” is the fourth studio album by American singer-songwriter Lana Del Rey. It was released on September 18th via Interscope Records and arrives after the limited success harvested with her latest album “Ultraviolence“, released on June 13, 2014.

The “Video Games” songtress is currently working in the studio with some of her usual contributors like Dan Auerbach, Paul Epworth, Greg Kurstin, Rick Nowels or Emile Haynie.

Lana and Interscope plan to release the album when she finished her newly announced “The Endless Summer Tour“, with a total of 17 concerts across United States, from May 7 to June 16.

Currently, the singer is in full promotion of her new track “Big Eyes“, main theme of Tim Burton’s film with the same name.

During a Q&A with Billboard on January 6, Del Rey confirmed the title of new album and some details, she has nine songs written, four of which “the production is perfect; I’m looking for a few more songs to tie everything together“, and thanks to her cinematic new song “Big Eyes“, she’s also in the thick of awards season.

During a recent interview with Interview Magazine, Mark Ronson confirmed that he is working with Lana in her new album. He said:

I’m going to do some recording with Lana Del Rey today and tomorrow. I found this cool old studio out here (…) She has some songs and I said I had some demo ideas, and if they are any good, then maybe she’ll like them and we’ll go from there

In early June, she filmed a music video for the album’s track “Music to Watch Boys To“, which was rumored the proper lead single, but evantually will be released as the final countdown single on iTunes on September 11th.

Lana premiered the full version of the album’s title track “Honeymoon“ on July 14th, and it’s scheduled to be released as instant grat on iTunes on September 7th.

She also confirmed that the album will include 14 tracks some with a muddy trap energy and some inspired by late-night Miles Davis drives.

The album’s track “Salvatore” was premiered exclusively on BBC Radio 1’s Hottest Record with Huw Stephens on September 15th. Del Rey has been working with her usually collaborator Justin Parker, producer of her big smash tracks like “Born to Die“, “Ride“, “Video Games” or “National Anthem“. New music on the way, re-release? deluxe edition of the album?

The singer recorded a special cover of Daniel Johnston track “Some Things Last a Long Time“, for the upcoming film “Hi, How Are You Daniel Johnston?“.

A 11-minute mini-film to support the album’s track “Freak” was premiered through Vevo including some music by French composer Claude Debussy. It was directed by Lana herself and produced by Justin Benoliel and NABIL.