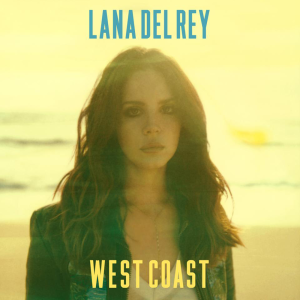 Lana Del Rey is finally back! The ‘Born to Die‘ star has ready her highly-awaited new single, first taste of her upcoming second major and third overall studio album ‘Ultraviolence‘, scheduled to be released on June 2, 2014 via Interscope Records.

The first official single is called ‘West Coast’, produced by Rick Nowels. The singer confirmed the news on her Twitter page on April 3, 2014. ‘West Coast‘ was exclusively premiered on BBC Radio 1 on Monday April 14 on the Fearn Cotton show.

The single is pure class, following the smooth, sensual singing style of her debut album, Lana delivered a Tarantino-flavor sound with a lot of changing tempos, introducing few new electronic sounds in her original style. Besides, ‘West Coast‘ has a pretty catchy hook with the ‘Uh baby, Uh‘., plus that loud af, out-of-place, synth barging in and interrupting the last chorus give me everything.

The promotional video was filmed in Long Beach in early April and it was directed by Vincent Haycock. It serves to promote the premiere of the track and was included on the official ‘audio’ video on VEVO. The official video was premiered on VEVO on Tuesday May 6th.

The official U.S. radio edit made by Dan Auerbach was premiered on April 18th. Another radio mix version made for the European market is scheduled to be released on iTunes on May 30th.