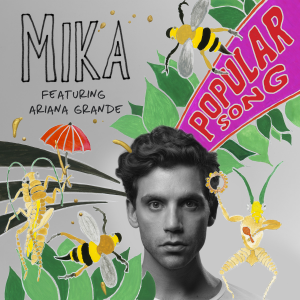 “Popular Song” is a song recorded by British singer-songwriter MIKA. The track written by himself with the collaboration of Priscilla Renea (who provided the backing vocals), Mathieu Jomphe and Stephen Schwartz is confirmed as the fourth promotional single and second for the American market taken from his latest and third studio album of his career “The Origin of Love” that was released on digital retailers on Setpember 21, 2012 via Universal Republic.

The single version of the track has the new vocals of Nickelodeon star, American actress, singer and dancer Ariana Grande which is involved in the recording of her debut album that will come next year. The single was released on December 18, 2012 and posted for sale on U.S. iTunes on December 21.

The music video was filmed in early March 2013 and it was directed by Chris Marrs Piliero and produced by Ryan Kohler via DNA. The music video was premiered on VEVO on April 29. The story and the video in general are fantastic. What extremely beautiful is Ariana Grande. Oh god…!