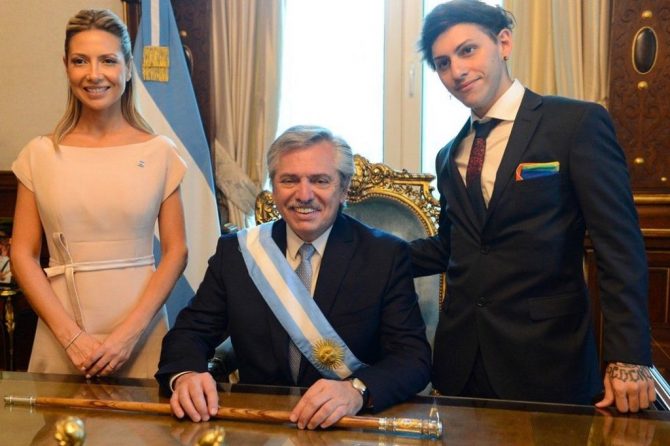 The pride flag represents a lot of things for the members of the LGBTQ+ community. It emblemizes the struggles of queer people and embodies the success that they have achieved throughout the year.

Argentina’s newly inaugurated president, Alberto Fernandez’s son, is a drag queen. A popular one at that. During the inauguration ceremonies of his father, the 24-year-old drag queen set off a media blitz by wearing what appears to be a pocket square that resembled the rainbow pride flag.

In a Twitter post, the younger Fernandez later confirmed that the handkerchief was indeed an actual pride flag that he folded to become a pocket square.

The Argentine president’s son moonlights as a drag performer named Dyhzy. She is a celebrity in Argentina’s drag scene and one of the famous drag queens who do cosplay. President Fernández has referred to his son as “his greatest pride.” He even commended his son for his contribution to the LGBTQ+ community.

“My son is a rights activist in that community,” he told  Radio Con Vos via Ushuaia Noticias, a local news outfit. “I would worry if my son was a criminal, but he is a great man. In that world, which I don’t know much about, [he] seems to be respected and very recognized. I have pride in my son; how can I not be proud?”

Why is this important?

For a long time, the gays, lesbian, bisexual, transgender, and queer (LGBTQ+) community has been treated as invisible people. Either they are treated as if their queerness does not exist, or they are simply shunned by their family. In a patriarchal and anti-gay society, the existence of a President who accepts his gay son is a huge step in the right direction.

It sends the message that gay children should be loved because they are your children. It challenges parents to follow the president’s lead. If the president can accept and love his gay son, how can you not?

President Fernandez is telling his people that there is nothing to worry about having queer children. Their queerness is the least of what comprises them. They are your children; they are rights activists, artists, etc. They are more than being gays.

There is something very symbolic in Dyhzy’s decision to wear the pride flag in his father’s inauguration. It symbolizes access. The young Fernandez is telling the LGBTQ+ community that queer people have now access to the most powerful person – at least in Argentina. It tells young gay boys that they are not invisible and that there is someone who is fighting for them.

This may be a small act of pride, but it goes a long way for the fight of a community that continues to struggle against the bigotry of society. For that, I salute you!