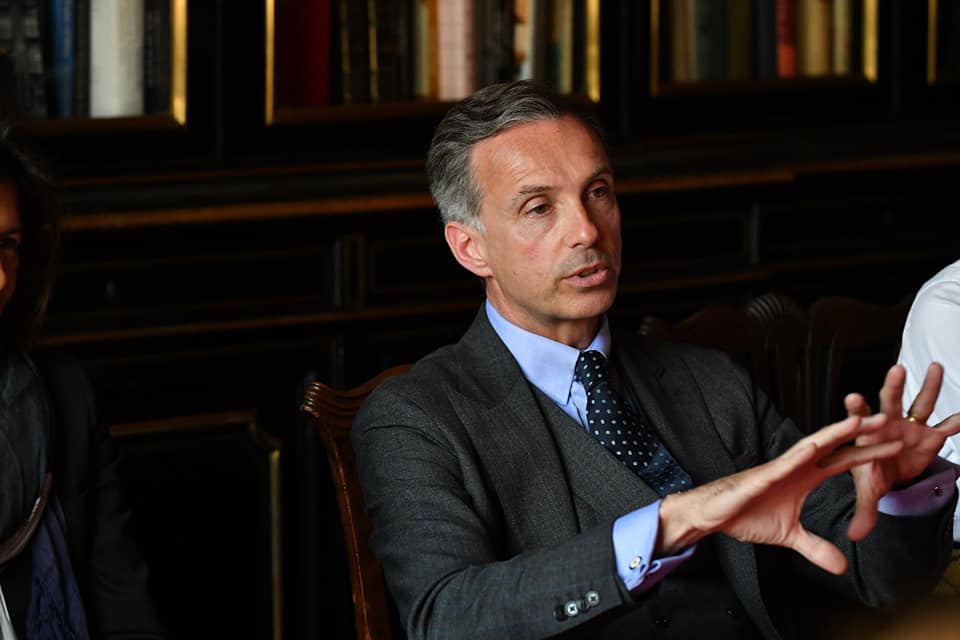 Henri de Grossouvre is a French author and known for writing on international relations from a European standpoint.

His first published book, titled ‘Paris Berlin Moscow’, sold out very quickly after its release in 2001 and was later translated into Serbian and Italian. Six years later, in 2007, Grossouvre published his next book, titled “For a European Europe, an avant-garde to break the deadlock”. It was prefaced by the Minister of Industry at the time, François Loos.

Grossouvre has lived in Belgium, Austria and Romania, and now resides in a German village just kilometres away from the border of France, which allows him to spend part of his week working in Paris. He boasts an impressive resume, having studied at Harvard Summer School, and is also a table tennis champion, cyclist and runner.

We were fortunate enough to speak with the busy Grossouvre and learn more about his literary life.

What motivated you to become a published author, and how do you write?

I think my journey into the literary world began with a passion for a few key topics, which I then started to write about. The first is the idea that we can revive what we call a ‘European Europe’ through a mode of avant-garde. The second is that a strategic cooperation between countries using the Paris-Berlin-Moscow axis will be beneficial. And the third is a more general interest in federalism and regionalism.

Not a lot of people were writing about these things, so I felt compelled to share my voice. So I started writing for international relations and geopolitics journals and newspapers. I have written around 100 articles and three books in around 20 years.

So these concepts are highly linked, which means that writing about them all is relatively easy for me. They are also linked to where I grew up, have travelled and now work – Germany, Austria, Romania, Russia and Hungary. I once worked in Kharkov and Kiev with Sagem Défense. This inspired my thesis ‘Ukraine, a new European power?’. So my work is really inspired by my life experiences and what is going on around me politically.

I am both geographically and linguistically related to my topics, and possess a deep appreciation for European culture and life. My writing is both an academic pursuit and a personal one.

As for my writing process, I start out by using what is currently in the media, as well as my own personal insights, to get ideas for material. You can see this in my writing – my articles and books reflect current affairs, but they also contain timeless themes related to both the culture and geography of Europe. My book ‘Paris Berlin Moscow’ reflects many of the themes written by people such as Jean-Pierre Chevènement and Charlemagne, except I wrote it during the 2001-2002 French Presidential Election. I worked on it intensively for months in order to get it published before the election commenced.

What did you learn through the process of writing ‘Paris Berlin Moscow?’

The most interesting thing I learned was how similar we all are, regardless of political stance or nationality. I was not expecting to find allies all around – left leaning, with the Socialist and Communist parties; in the middle, with the Radical party, and to the right. So I was exposed to a wide range of people through my research and work, and this helped to inform my writing. It became clear to me that everyone is asking the big questions, regardless of their background or current circumstances. Also, interestingly, I learned that the majority of Gaullists do not reside in Gaullist parties. They simply refer to themselves as a “Gaullian”, which I think I would like to do, too.

What motivated you to start writing your first book in particular?

‘Paris Berlin Moscow’ was born out of my passion for Russian and German culture and history. As a traditional French citizen, these countries really intrigued me. So it started out with me writing an original op-ed attempting to explain what is meant by Gaullism. I wanted to prove that the real successor of the great De Gaulle was Jean-Pierre Chevènement, rather than Jacques Chirac. I did this spontaneously in Le Figaro, and it was then published. As a consequence, Chevènement’s staff, including Georges Sarre, contacted me and requested I write up a brief related to Central Europe’s economic concerns. I declined, saying that I was not interested in writing about that, and that I could write about the ‘Paris-Berlin-Moscow’ axis instead. This was a concept that Chevènement himself had pioneered, but no work or writing had been done to develop this idea. And so I stepped in, which they were grateful for.

What does the Paris-Berlin-Moscow axis refer to?

Essentially, it is the notion that Greater Europe possesses an incredible amount of unrealised potential. Just as the six original states initiated the construction of Europe, this idea says that Russia, Germany and France could work together to further develop Europe. France is positioned strategically in Western Europe, whilst Germany occupies Central Europe, and Russia is perfectly placed to the East, where it is linked with Asia and much of the developing world. By working together, these great countries can use their strong traditions, history, literature and culture to develop Europe and become real actors on the world stage once more. Because it’s clear that most countries in Europe have been mere subjects on the international stage since the mid-century.

What has the feedback been like for your book, ‘Paris Berlin Moscow’?

I am very grateful to have received a great amount of constructive feedback on ‘Paris Berlin Moscow’ over the years. Many agree that the axis is an excellent idea that should be pursued, whilst others challenge it – which I am grateful for, as it allows me to develop the concept further. Being able to receive such varied feedback is in part thanks to it being published in several languages. I have been lucky to have had the chance to meet and connect with a diverse range of people; it has allowed me to create a powerful network of experts and friends that spans worldwide.

Henri de Grossouvre is an exceptional case of an author and passionate international relations enthusiast who is impacting the world stage. If these topics interest you, consider reading his works, many of which are available online through a number of literary journals and publishing houses.