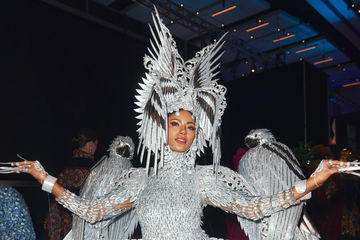 Oh-oh! It seems like Steve Harvey mixed up names in proclaiming winners in the Miss Universe Coronation Night.

Except that this time, he got it right the first time. Confusion ensued after the long-time Miss Universe host, Harvey, announced Miss Philippines Gazini Ganados as the winner of the National Costume category of the pageant, flashed her photo on the big screen, and then interview Miss Malaysia instead.

Many people shrug the stunt off as they thought that it was just one of the jokes of the playful Steve Harvey to make fun of his Miss Universe mishap. In 2015, Harvey called Miss Colombia as the winner of the competition and retracted his proclamation after almost immediately after the beauty queen was crowned. The reason for his retraction is that the real winner is Miss Philippines Pia Alonzo Wurtzbach, who was as equally surprised as everyone in the arena.

This time, when Harvey proclaimed Ganados as the winner of the National Costume award and interviewed, Malaysia’s Shweta Sekhon instead, Miss Universe organization had to clarify publicly.

In a Tweet, the Miss Universe Organization confirmed that Miss Philippines is the winner of the coveted award, and Miss Malaysia was only interviewed because the former is in the stage as she qualified for the Top 20.

“.@IAmSteveHarvey had it right: Miss Universe Philippines Gazini Ganados is the winner of the #MissUniverse2019 National Costume competition! Congratulations, Gazini,” the organization posted on Twitter.

The clarification, albeit a little late, gained mostly negative reactions from Miss Universe fans around the world. People on Twitter quickly pointed out that what happened was recklessness in the part of the organizers and a ploy to make something viral.

“How unprofessional this organizer is. Doing it again just to trend. What a shame! ONCE is enough. But doing it for the SECOND time? And ON PURPOSE? Care to explain?” one Twitter user commented.

Others also called out the organization for being unfair and for robbing Gazini Ganados and the Philippines their well deserved winning moment.

” Too late!!! You didn’t manage to GIVE our Queen a moment for Presenting our National Costume for the Last Time! Failed Organizers! What an Epic failed from Preliminary to Final! So Disappointed! If the Philippines, why Malaysia was wearing her National Costume?? #MissUniverseFailed,” another one chimed in.

Some also claimed that what happened is not only unfair to Gazini but is also to Miss Malaysia, especially because she did not win the award.” Pity our miss Malaysia (crying emoji) the organizer made the mistake again just for the rating (slur emoji) chin up miss Malaysia,you still the winner in our heart (heart emoji) give some morale support for this woman guys,” one fan commented.