Rumors are swirling that the successful hotel-booking platform Trivago is changing up its advertising campaigns, bringing onboard several “new faces.”

Additionally, the German transnational technology company has hired advertising giant Peppercomm as U.S. AOR after the agency announced the news on twitter.

We all know and love the Trivago Guy or Girl? They are familiar on a worldwide scale due to smart marketing. The clever campaigns have become a national institution, and it appears fans of the famous brand are desperate to find out who are the hosts of its upcoming 2019 and 2020 media and marketing plan.

One person who is garnering much of the attention is former TMZ news guy — turned travel and lifestyle expert — Sean Borg.  Borg can be seen in a series of Trivago campaign images circulating the Internet, creating much excitement among Trivago die-hards.

The promo picture feature Borg posing with the familiar “multi-colored” Trivago logo emblazoned across his T-shirt. This leads fans to believe that Borg might be one of Trivago’s new faces.

The campaigns have proved immensely popular among travelers worldwide, which saw Australian actress and model, Gabrielle Miller as the Trivago girl. Miller appeared in a series of successful ads, mainly in the U.K.

According to Trivago former regional manager — Diana Vidovic, Miller is on hiatus. She was quoted recently saying: “While Trivago Girl isn’t gone for good just yet, she’s taking a hiatus.” And the original player, Tim Williams, can still be seen in the U.S commercials.

This leads us to ask, is British-born Borg, one of the hot new faces promoting Trivago?
Here’s what we know about Sean Borg, so far. He is been around for some time, moving and shaking in the entertainment world.

He is a well-known host and columnist who has appeared on T.V. shows and showbiz websites over the years, including TMZ, Hollywood 411 (with ‘The Bachelor’ host, Chris Harrison) for T.V. Guide, and was once even a writer for The New York Post’s — PageSix column.

He is also a friend of Hollywood socialite and hotel heiress — Paris Hilton. Now that’s a connection to the hotel world!

Is what we are hearing, however, just a bunch of clever hype from the world’s leading hotel price comparison site?

Growth rates of Trivago’s (NASDAQ:TRVG) financials make it one of the most exciting stocks to analyze at the moment, making its upside quite significant.

Trivago’s marketing and product optimization efforts in the past year are paying off as the metasearch site grew its referral revenue in June compared to one year earlier, while its advertising spends lower in the same time frame. 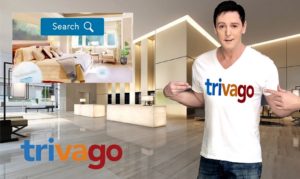 Shares of Trivago gained 22.1% in July, according to data from S&P Global Market Intelligence.

Trivago posted its results on July 24, with sales and earnings for the period topping expectations and helping the stock close the month with substantial double-digit gains.

When asked, Trivago’s head office in Düsseldorf would not make comment on its future campaigns