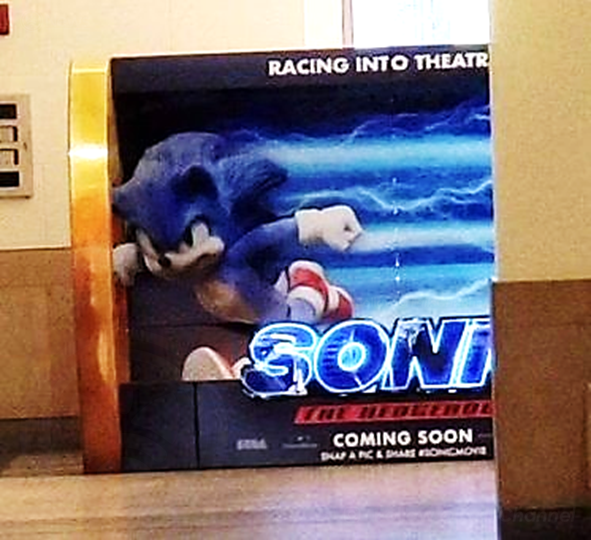 The Sonic The Hedgehog movie, originally slated to be released this November, was delayed following a massive negative online reaction to the titular character’s CGI rendering. Fans of the iconic video game character pointed out major flaws in the original design that was debuted in the trailer in April earlier this year.

The director promised to delay the film and take the lead character’s design back to drawing board, promising something more in-line with way the lighting-fast blue hedgehog has been portrayed in his video games and spin-off media in the decades since his original creation by SEGA. Now it seems that fans’ prayers have been answered (at least somewhat) with a twitter photo showing what appears to be a promotional cardboard banner showing the new and improved Sonic.

Breaking: A #SonicMovie standee featuring a newly redesigned Sonic was spotted at a undetermined location. This story is developing. #SonicNews pic.twitter.com/ymcgSYjg4a

There is no information on where the banner is located or what stage of production it is from. It may be possible that its leftover from a stage of design prior to the monstrosity fans were exposed to back in April.

However, online reactions seem to be largely positive, with many commenters saying that it was much improved over the original. A lot of people seem to be shocked and delighted that a major movie studio actually took fan feedback seriously enough to redesign a CGI character, something that can’t have been a cheap or easy undertaking.

With the film set to be released on February 14th (Valentines’ Day) 2020, it will be interesting to see whether or not fans fall in love with this imagining of Sonic or reject the movie like so many other video-game/film adaptations.

Avengers: Endgame producer says there won’t be a major saga-story for a while
Cara Delevingne set to host new female-focused prank show